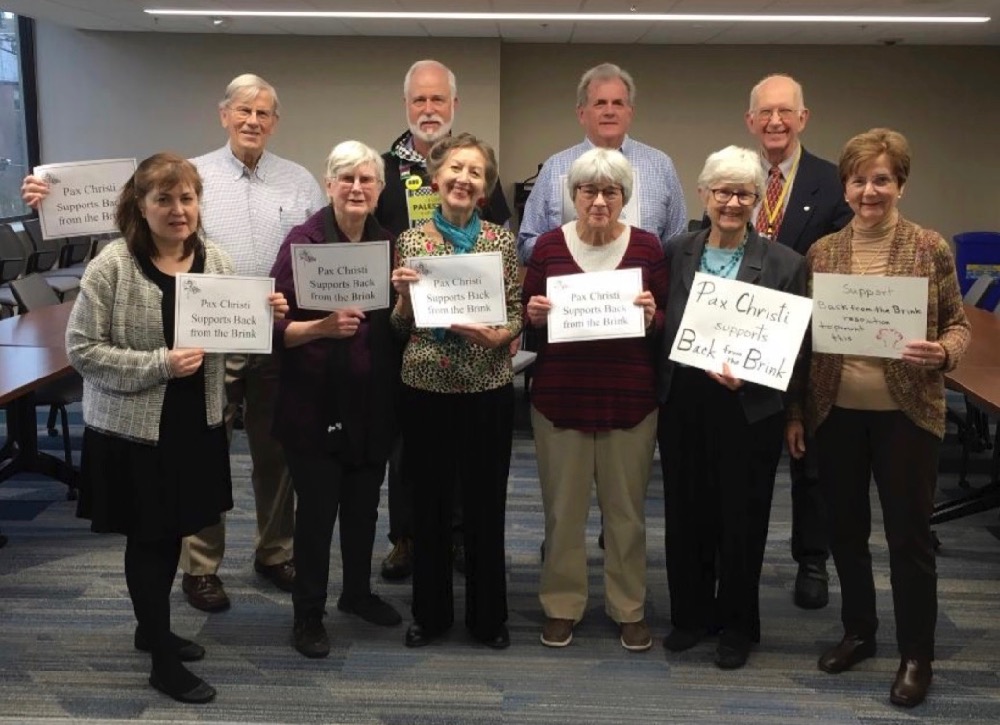 The Christmas message is one of PEACE and LOVE. I am proud to say that today Pax Christi was a leader in the effort to protect our community and world with the PEACE that non-proliferation of nuclear weapons could bring as an expression of LOVE for our children and grandchildren. Today, December 10, 2019, the Montgomery County. MD Council passed a resolution to join the scores of cities who do not want nuclear weapons in their back yards or on their watch. The message of BACK FROM THE BRINK is being sent over and over from the grassroots. But the operative word here is COUNTY. We are the first county in the USA to pass this resolution.

Why did I do my part to make this happen? Earlier this year, several Pax Christi members met with Council Member Sidney Katz to speak about our concerns. While others spoke, appropriately, of the effect for humanity, I spoke from a VERY PERSONAL perspective, to bring it down to my community’s level. I suspect it is an unusual approach to this issue given that my concerns are with nuclear power as well as nuclear weapons and their effect on communities who build and use them.

On March 28, 1979, Three-Mile Island, then our local nuclear power plant, had a “meltdown,” an “accident.” This was calming language for what became the most terrifying nuclear power disaster that we know of in United States history. Because of a mechanical (or electrical) failure, the water level was reduced in the plant, causing it to super-heat. My husband Dennis and I lived close to the plant in Harrisburg, Pennsylvania. But at the time, he was in France preparing a report for one of his many international projects. I was alone with 3 children, ages 9, 7 and 5.  The schools closed and the anxiety level was off the charts for all of us there, as we had no idea whether or when the rising plume would encompass us. I needed to get our children out of there, as the thought of the potential effect on them was making me sick.

As many people did, we left the area, going to friends living in Durham, North Carolina. Travelling with the 3 children got me out of the situation physically, but not mentally.  Thank goodness for good friends who took us in! Eventually, school did start back up, so I decided to bring the children back. But before I could get home, I had to deal with a terrible, persistent pain in my mouth. We stopped at the dentist before arriving home and he stated that anxiety was responsible, as nothing was physically wrong. To this day, I can still feel that pain when I tell this story.

It didn’t end there, at least not for me or one of our daughters. We were told that we could expect an increase in cancer cases in the area around 10 years after the accident. Our oldest daughter, Malaika, did get cancer approximately 10 years later, in her teen years. While she was being treated (successfully, thank God), I sent a letter to the State of Pennsylvania, hoping that someone was paying attention to this potential research subject. I never heard a word nor had any reply.

So it is a good day today, when my county voted to put our opposition to nuclear weapons on record and to avoid putting a mechanical or electrical failure between us and our lives. I feel it PERSONALLY.

May you all have a beautiful, holy, Christmas filled with PEACE in your household and YOUR community, and LOVE spread to all.