Did Jesus Use Violence against the Merchants in the Temple?

Did Jesus Use Violence against the Merchants in the Temple? 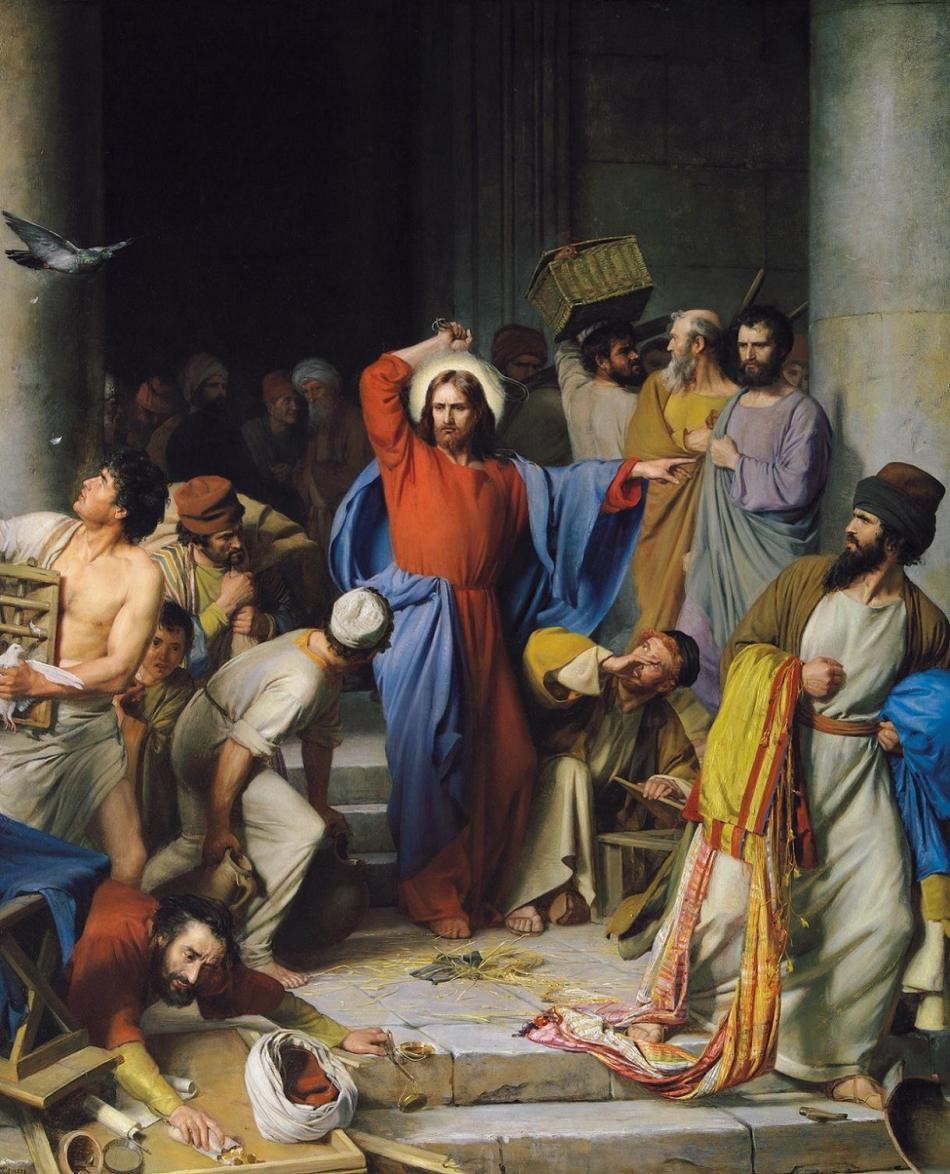 Christians who think the use of violence against others can be justified under some circumstances will occasionally cite the story of Jesus cleansing the temple in support of their position.  If Jesus could use righteous violence when it suited his purposes, they argue, so may Christians and others when it suits theirs.  But is that an accurate interpretation of the Gospel account?

John 2:14-15, on the other hand, adds details to the story.  According to the New American Bible translation (the one used in the Catholic Lectionary), Jesus “found in the temple area those who sold oxen, sheep, and doves, as well as the money-changers seated there.  He made a whip out of cords and drove them all out of the temple area, with the sheep and oxen, and spilled the coins of the money-changers and overturned their tables . . . .”

Only John mentions Jesus’ making a whip out of cords.  Should that be considered a historical detail that the Synoptic authors omitted, or an embellishment that John added for dramatic effect?  It’s hard to know for sure, but other literary developments in John lend credence to the latter explanation.  For example, John has moved this whole incident from the end of Jesus’ ministry to the beginning, for literary purposes. [1]  John is also the only one to mention the presence of sheep and oxen.

If Jesus did not use a whip at all or used it only on the animals, how did he drive out the merchants? One imagines Jesus creating pandemonium, waving his arms, overturning tables, and shouting at the merchants about their turning a house of prayer into a den of thieves, while they frantically try to retrieve their scattered coins and startled animals.  Both Mark and John indicate that Jesus’ disciples were with him.  If so, their presence may have helped dissuade the merchants from trying to resist Jesus’ prophetic action.

Did Jesus’ action constitute violence against the merchants?  That depends, of course, on one’s definition of the term.  It was undoubtedly a significant disturbance, but there is no reason to think anyone was physically harmed or even that any property was damaged.  It is noteworthy that, in Mark’s and Matthew’s accounts of Jesus’ trial before the Sanhedrin, we’re told that the chief priests “kept trying to obtain evidence against Jesus in order to put him to death” (Mk 14:55; Mt 26:59), yet no one accused him of using violence in the temple.

Nor did the early Christians interpret Jesus’ actions in the temple as justifying violence.  They saw Jesus as completely nonviolent and followed his example in refusing to use violence, even in legitimate self-defense.

Finally, even if one views Jesus’ actions in the temple as constituting a form of violence against the merchants and their property, it would be a non-injurious violence that has nothing in common with arming oneself to use lethal force against another, much less with a nation’s spending enormous sums annually to arm itself, train for, and wage war.

The views expressed in this essay are the author’s and not necessarily those of Pax Christi or St. John Neumann Church.

For a PDF version of this essay, click here.

[2] The one shown above is by the nineteenth century Danish painter Carl Heinrich Bloch.